Nautical Painting of the Ship "Dredenot" 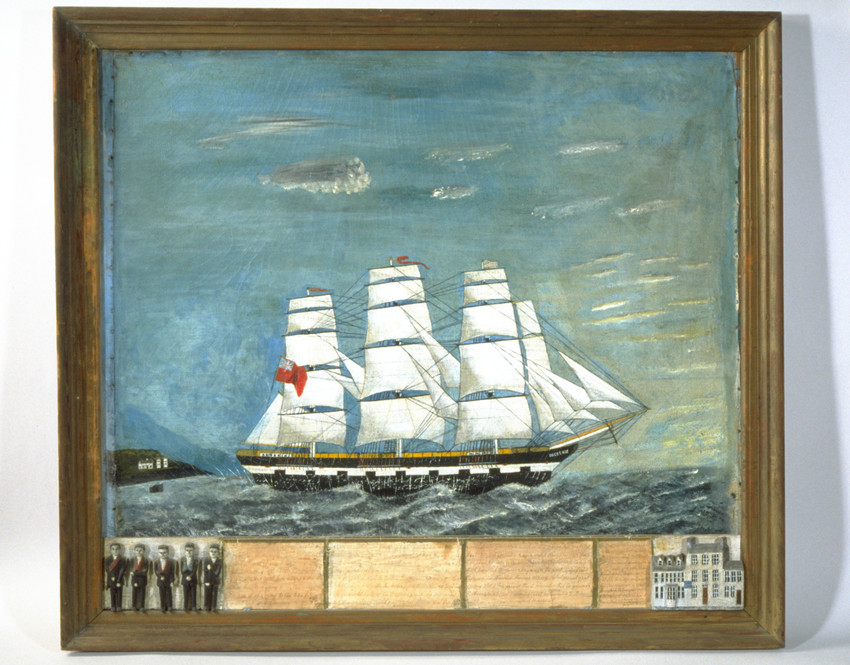 Painting of the ship "Dredenot". Oil on canvas, with carved wooden figures. The ship is flying the British flag and passing a spit of land, Lands End, England. A wooden board is affixed to the bottom edge of the canvas and has four sheets of yellowed paper attached to the center. The papers note with the legend/history of the Odd Fellows. There are five carved wooden figures (the American founders of the Odd Fellows) affixed to the left side of the board and a small painted model of the Seven Stars Tavern affixed to the right. The ship "Dredenot" carried Thomas Wildey, the first Odd Fellow, to America. The ship arrived in Baltimore on September 2, 1817. The Washington Lodge of Odd Fellows of Baltimore was organized on April 29, 1819, by Thomas Wildey, now recognized as the founder of the American Odd Fellows. He came from England in 1818. Wildey began his search for Odd Fellows on February 13, 1819, when he advertised in the Baltimore American. With his four associates John Welch, John Duncan, Richard Rushworth and John Cheathem they started the lodge at the Seven Stars Tavern.

Storytelling pictures such as this one made circa 1850, were favorites of the Littles whose collection is on view at Cogswell's Grant in Essex, Massachusetts. Here the ship Dredenot [sic] is leaving Lands End, England for America. On board was Thomas Wildey who, in 1817, was the first Odd Fellow to reach America. The history of the founding of the Odd Fellows in America is written on the four sheets of paper at the bottom of the painting. The five carved figures at the left represent the original members of the first lodge, which was organized in 1819 in Baltimore at the Seven Stars Tavern, represented by the building on the right.

On the ship's prow, in white letters, is written: DREDENOT . On the reverse of the frame in the lower right corner, on a white sticker in pen is written: 15-555/395 [illeg.] In the lower right, on the reverse, in pencil is: 7 (what looks like an upside-down question mark)/2 On the reverse of the upper frame, is a white round label, written in a felt tip pen is: 55 . On the 4 yellowed sheets of paper, adhered to the board at the base of the image (now under plexiglass), is the legend/history [as transcribed]: ""Sailing thu the English Channell sailing to America we see the lands ende the most westerly point of England. Open that Whegi Promatory stand the two revolving leghtes as a gaid for ships on the ocean that is going to or coming over the sea, et is a joy to the seafaring in a dark and gloomy night. An hundred years ago there was no steamship but sailing ship. Thomas Wildey a native of England secured passage on a sailing ship Weste arriving in Baltimore the 2nd of September 1817 the 13th of April 1819 the 5 persons, Thomas Wildey, John Welch, John Duncan, John Cheatham, Richard Rushworth, the satisfyed themselves that each was and Odd Fellow the organiz a lodg on April 20 1819. The meeting held on April 13 was real the beginning of Odd Fellowship in America. Although the Frail Craft was not formally launch until April 26 1819 when at a Tavern known as the Seven Starr kept by an William Lupton the 5 English mechnics organezth the first Lodge of Odd Fellows in America, Thomas Wildey, Nobelgrand an John Welch Visgrand the five members that begen Odd Fellowship have now increst in number to two million and an hundred thousand. The first Odd Fellow Lodge in Baltimore with Thomas Wildey Nobelgrand. Little dead think that theire name should be written and so widely distribute and a monument ereted to there memory and that the organizesen of a Odd Fellowship as excepted in all civilized nation for et teach that wi / Fading not when life has perishd / loving still beyond the tomb."" (handwritten)