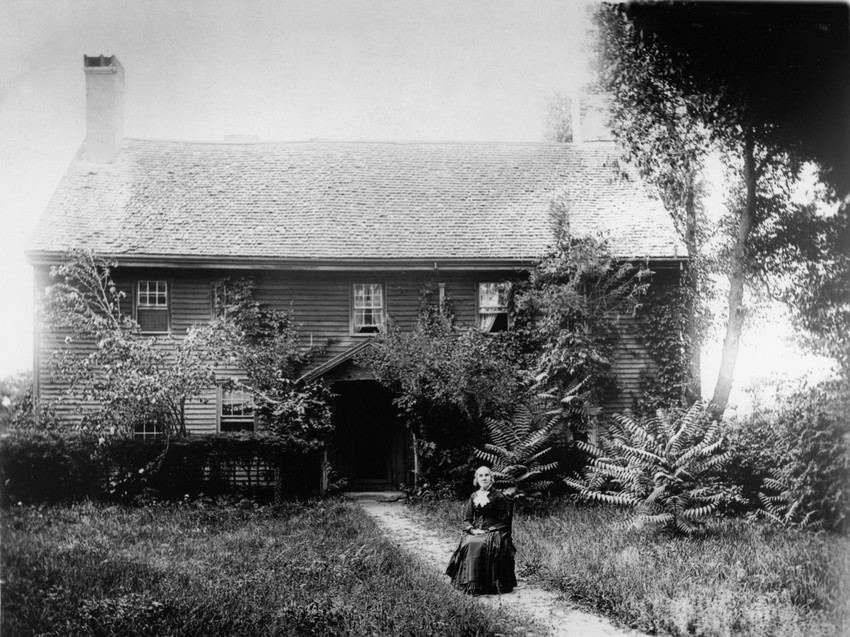 The Coffin family papers (MS010) focus on domestic, commercial, and civic life during the mid-seventeenth century through the early twentieth century, reflecting the life and work of the Coffin and Coleman families of Newbury, Massachusetts. Materials within the collection relate to the towns of Newbury, West Newbury, and Newburyport in Massachusetts; Buxton, Maine (formerly Narragansett); and Contoocook, New Hampshire. Comprised primarily of land deeds, estate papers, account books, and correspondence, the papers highlight the role of the town proprietors, the daily operation of the Coffin family tannery business, the running of the Coffin family household and estate, and the life of merchant sailors. Material relating to the "Siamese Twins," Chang and Eng Bunker (1811-1874), and their relationship with the Coffin family through Abel Coffin (1792-1837) and Susan (Hale) Coffin (1792-1837) is also included in the collection; there is also material relating to abolitionist John Brown (1800-1859). The collection is arranged in nineteen series.

Background:
In 1929, Historic New England acquired the Coffin House in Newbury, Massachusetts, from Margaret E.C. Merriam (a fourth great granddaughter of Tristram Coffin, Jr., 1632-1704). The papers within the house at the time of acquisition formed the bases of the collection: Coffin family manuscripts collection (now MS010). In 1986, intern Amey Case Callahan processed the papers and created the original finding aid. Callahan arranged the papers into series, chronologically by family member or by groups of relatives (i.e., siblings), then by record type; bound account books were placed into a separate series and were cross-referenced with the corresponding individual(s) who kept them. The collection was housed in acid-free folders and document boxes; folders were numbered by box; and a paper finding aid was created, which included an index and a compilation of genealogical material. In 1987, Amey Case Callahan processed and created a separate finding aid for the papers of the Abel Coffin (1792-1837) and Susan (Hale) Coffin (1792-1837) family: Abel and Susan Coffin manuscript collection (now MS010). Again, Callahan applied the same arrangement scheme as described above (in lieu of a bound account book series, a photograph series was created). When fully processed, the collection comprised eight file boxes (approx. 3.34 linear feet).

Update: 2013-2014
In 2013-2014, through a National Historical Publications and Records Commission grant (Award Number: NAR13-RH-50051-13: "Family Manuscript Collections: Expanding Online Access to New England Heritage Project"), twenty-six Historic New England manuscript collections of family papers were re-evaluated and processed/reprocessed to meet current archival standards and "best practices;" corresponding finding aids were created/updated to be DACS-compliant and converted into electronic Microsoft Word document form; and the finding aids were made accessible/searchable online through the use of the Minisis M2A archival database of the Minisis Collections Management System. The Coffin family papers (MS010) were part of the grant project.

During the 2013-2014 collection reprocessing/updating, the two 1986/1987 finding aids were combined into one collection (MS010) and the original arrangement schemes updated to reflect an alphabetical arrangement of Coffin family members, rather than a chronological arrangement. Both the bound account book series and the photograph series were maintained. Most of the original folder titles were maintained; the bound account books were properly labeled and housed; and related folders were combined or rearranged, as applicable. Additional loose material was integrated into the collection and properly housed; preservation issues were identified and basic preservation methods were applied, as applicable; papers throughout the collection were removed from envelopes (if applicable), unfolded, flattened, and related pages were noted with corresponding information in brackets ([x-1/3], [x-2/3], [x-3/3]; and oversize material and photographic material were rehoused appropriately (or materials were interleafed within file boxes), as applicable. The scope and content notes, biographical/historical sketch, and genealogy were updated accordingly. The overall collection was rehoused using new acid-free, legal-size folders and boxes, as applicable), numbered, labeled, barcoded, and stored accordingly; subsequent accessions were tracked and noted with their corresponding items; and related collections held by Historic New England and other repositories were researched and noted. The original 1986/1987 paper document finding aids were updated to be DACS-compliant, as applicable; converted into an electronic 2010-2013 Microsoft Word document finding aid (with corresponding paper finding aid); and entered into the collection record in the Minisis M2A online database.

Note: One ambrotype and three daguerreotypes were separated from the collection prior to the 2013-2014 collection reprocessing/updating. See Daguerreotypes Collection, ca.1845-1865 (PC005).

Note: In 1984, prior to the 2013-2014 collection reprocessing/updating, the Edmund Coffin (1764-1825) 1816-1819 account book (#C.1.21) was separated from the collection and transferred to the wallpaper collection due to the cover of the item being comprised of a wallpaper fragment. The account book was transferred back to the Library and Archives in 2014 and has been reaccessioning and reincorporation into the collection along with additional documentation and material (#C.1.21).

NOTE: Processing/updating the collection and making the finding aid accessible online were made possible through grants from the National Historical Publications and Records Commission (Award Number: NAR13-RH-50051-13), the Bedford Family Foundation, and an anonymous donor.

·This collection is available for research.
·Unrestricted except for #3.2, C.1.28, C.1.51, C.2.30, C.2.39, and C.2.41, which contain fragile material and require handling by Library and Archives staff only.
·Note: due to aging materials and condition of the materials, the whole of the collection requires handling with care.

Accruals are not expected.

The Coffin family was originally from Devonshire, England, and was somewhat prominent there. Tristram Coffin Sr. was a royalist during the English Civil War. He chose to leave England when the king was deposed and Oliver Cromwell installed. In 1646, the family, with the exception of the two older sons, Peter and Tristram, emigrated, eventually settling on Nantucket. Peter, the eldest son, left for New Hampshire, leaving fourteen-year-old Tristram Jr. the only remaining Coffin in Newbury. It is possible that Tristram was indentured to a local tradesman, as was common. It is also possible that his master was Henry Somerby, whose twenty-eight-year-old widow Judith married the twenty-one-year-old Tristram in 1654.

It was long believed that Tristram Jr. brought his young bride to the Coffin House in 1654. However, conclusive dendrochronology has since proven this house to date from 1678. Because we know that Judith inherited a substantial house and many possessions from her first husband, it is assumed that the Coffins set up housekeeping in another house on the lower green near the Parker River. It was in the other house that Judith and Tristram raised their ten children and her three Somerby children as well; later in their lives they moved to the new house on the upper green.

Tristram Jr. and Judith lived in the house until they died in 1704 and 1705 respectively. The house and land were inherited by their youngest son, Nathaniel, who had remained at home with his aging parents. In 1693 he had brought his bride, Sarah Brocklebank, to live in the house. Nathaniel and Sarah had eight children (all but one lived to adulthood), five of whom were born before the deaths of Tristram and Judith. Of their children, Enoch (1696-1728) and Samuel Brocklebank (1700-1727) both studied for the ministry at Harvard College. In account book #1, for the years 1710 through 1714 Nathaniel enters the money paid for Enoch's "Quarters expense." There is also an entry for "ye degree diner." Samuel started Harvard in 1714 and the expenses for his first two "quarter bills" are noted on the same page.

Nathaniel, like his father, appears to have combined a variety of activities in order to support his family. On many documents, such as land deeds, Nathaniel is listed as a merchant-tailor, as was his father. However, family account books indicate that he started the tanning business that would sustain the family into the 1800s. Like his father, he was prominent in Newbury affairs. He was a deacon of his church, he served the colony beyond the town as a representative to the General Court in 1719-1721, was Councillor to the Province in 1730, and Justice of the Peace in 1734.

In 1725, Nathaniel's son Joseph brought home his bride Margaret to set up housekeeping, and the house saw the start of another generation. When Joseph and Margaret moved in, Joseph's parents and three of his siblings were still living there. Margaret and Joseph had eight children (six survived to adulthood). Joseph and his son, Joshua, like the generations before them, engaged in a variety of activities to sustain the family. They continued in the tanning business, but also maintained tillage land, orchards, pasture, and livestock.

Both Nathaniel and Joseph were active in the local community. They held the office of Newbury town clerk consecutively from 1711 to 1773. The town's population continued to grow. The first census, taken in 1765, indicates that the town's population had reached 2,960. The town was an important agricultural community, but manufacturing enterprises were growing.

In 1755, Joseph's son Joshua married Sarah Bartlett and brought his bride back to the house where his parents continued to live. Joshua and Sarah had twelve children (eight survived to adulthood). Joshua and Sarah also took in apprentices. Historic New England has a copy of the 1772 indenture between a Daniel Mitchell of Wells, Maine, and the Coffins. The agreement is that the Coffins will teach Daniel "the art, trade, and mastery of a tanner...during the term of 5 years, seven months, and 75 days...and also to learn him to read and write legibly...and at expiration of term give him 2 good suits of apparel for all parts of his body, one for the Lord's day, the other for working days."

In 1785, the house which had for so many years seen three generations living as one family was legally divided. Edmund Coffin, one of Joshua's two sons, reached twenty-one and wanted his share of his deceased father's estate. Consequently, a division was made first between the two sons and their widowed mother, and after her death in 1798, between the two sons. Each had exclusive use of certain rooms, stairways, and cellars with right of passage through some of the other rooms. The "families" lived separately under one roof, using different kitchens and entertaining rooms. The house remained divided this way through the last generation of Coffins to occupy the house.

Edmund and Joseph Coffin legally divided the Coffin house in 1785, and it was their children, Joshua (1792-1864) and Lucy (1811-1893), who lived in their separate spaces through most of the nineteenth century. Joshua graduated from Dartmouth College in 1817 and taught school for many years, numbering among his pupils the poet John Greenleaf Whittier, who addressed to him a poem entitled "To My Old School-Master." Coffin was ardent in the cause of emancipation, and was one of the founders of the New England Anti-Slavery Society in 1832, serving as its first recording secretary. He published A Sketch of the History of Newbury, Newburyport, and West Newbury from 1635 to 1845, genealogies of the Woodman, Little, and Toppan families, and magazine articles. As an adult, Coffin lived for a time in the downstairs southwest room of the house. Meanwhile, Joshua's first cousin Lucy lived her whole life in the front range of the house.

After Lucy Coffin's death in 1893, the house passed to her sister Elizabeth's children. The family was well aware of the importance of a house that had remained so unchanged and in the same family for so many years, but was not interested in living in the house. A series of tenants and family members lived in the house for brief periods, but in 1929, Lucy's niece, Margaret (Coleman) Merriam, who had inherited both sides of the house, made the decision to give the house to Historic New England.

Another member of the Coffin family but descended from Nathaniel Coffin's brother Stephen is represented in the Coffin family papers. Abel Coffin was the son of Lemeul and Catherine Coffin. He and his son Abel H. Coffin were ship captains and traveled all over the world. The letters in this part of the collection include bits of information about family life in the early 1800s, ports of call, ship building, ocean crossings, funerals at sea, transportation, and the conjoined twins Chang and Eng Bunker, whom Abel Coffin "discovered" during one of his trips to the Orient and brought back to the United States.