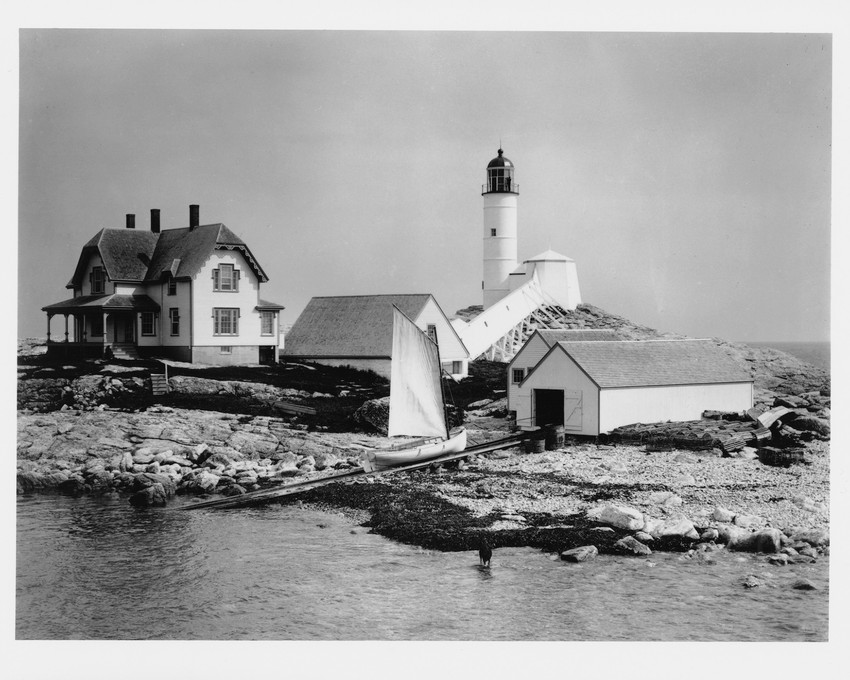 The Henry G. Peabody Photographic Collection contains more than 250 of his original prints. His long and distinguished career as a view photographer began in Boston in the 1880s, when for a short period he specialized in marine views. Peabody and Nathaniel L. Stebbins photographed the same races in the early 1890s, though Peabody's work has a somewhat more calculated "artistic quality."Only a few other institutions are known to possess sizable numbers of Peabody's marine views. These include: the Peabody-Essex Museum of Salem, Massachusetts; the Library of Congress; and Robert Weintstein, a photographic historian in Los Angeles, California. Historic New England does not own any of the original glass plate negatives from which the Peabody photographs were made. However, it does hold much additional work by Peabody, reflecting his later career as a "view photographer" with the Detroit Publishing Company. These are noted in the Index to Photograph Albums. Source: Campbell, Joan. Finding Aid to the Henry G. Peabody Collection, 1982; Guide to the Library and Archives, 12-13.

Henry Greenwood Peabody (1855-1951), photographer, lecturer, and publisher of educational slides and films, enjoyed a remarkable career spanning nearly sixty years. Peabody produced thousands of photographs, slides, and films documenting the American landscape, worked in virtually every photographic process, delivered lectures describing the scenery that he so lovingly photographed, and published books that visually described the landscapes and scenery in which he specialized.Peabody was born in St. Louis, Missouri, the son of a minister. He attended Washington University in St. Louis, the Pennsylvania Military Academy, and Dartmouth College, where he graduated in 1876. It was while a senior at Dartmouth that Peabody first became interested in photography, producing views of the Dartmouth campus and scenes along the New England coast. After graduation, Peabody spent a year at the Massachusetts Institute of Technology studying architecture, electricity, and physics. He then went to work briefly as an engineer for the Western Electric Company in Chicago and New York. Henry G. Peabody was a partner with J. A. French in the photographic firm Peabody & French, around 1875. The firm issued a series of stereographs of interiors at Dartmouth College.In 1879 Peabody set up a studio with Alexander Hesler in Chicago. While there, he met and married Dora Phelps, and the two relocated to Boston where Peabody opened a studio in 1886. He specialized in marine, landscape and architectural photography. He also served as the official photographer for the Boston and Maine Railroad and the Great Northern Railway, photographed the America's Cup races, and published "Representative American Yachts and The Coast of Maine". In 1899, he traveled to Mexico as photographer to the American Architectural Expedition; his photographs were published in Spanish-Colonial Architecture in Mexico by Sylvester Baxter. Peabody won numerous awards for his photography.After Dora's death in 1898, Peabody needed security for his only child Mildred, and accepted a position with the Detroit Publishing Company, the largest postcard publisher in the United States. From 1900 to 1908, he served as field photographer on both the east and west coasts. Famed landscape photographer and company founder William Henry Jackson selected Peabody for this position because of the high regard in which he held Peabody's outdoor work. Because of copyright arrangements, many of the images Peabody created for the Detroit Publishing Company have been wrongly identified as those of Jackson.Shortly after joining the Detroit Publishing Company, Peabody relocated with his young daughter to Pasadena, and his primary focus shifted to the landscape of the American West. He also traveled to England and France in 1908 to photograph cathedrals and other architectural monuments for the Horace K. Turner Company of Boston. From about 1910 to the end of his career, Peabody produced photographs and slides of the American landscape for educational purposes. He published series of educational lantern and film slides and educational films with accompanying narratives that focused on national parks in the American West. He also delivered illustrated lectures that covered the Grand Canyon, the California Missions, Yosemite, and Mexico. By the early 1930s, he was making audio recordings designed to synchronize with the slide shows; he called these his "talking films" and they were included in his educational offerings.Peabody spent his later years selling photographic equipment and photographing the landscape around his home in the San Gabriel Valley. He died at his home in Glendora, California, just one month shy of his ninety-sixth birthday.Chronology of Henry PeabodyApril 27, 1855 - Born in St. Louis, Missouri, the son of the Rev. Charles and Henrietta (Greenwood) Peabody. -- Prepared for college at Washington University, St. Louis, and Pennsylvania Military Academy, Chester, Pennsylvania. from Dartmouth College, as had his father in 1839. Had taken up photography his senior year. 1876-77 - Attended Massachusetts Institute of Technology for a year of special study in electricity and architecture. 1877-79 - Employed by the Western Electric Co. in Chicago, where he continued to study photography.1879-80 - Engaged in photographic work in Chicago. Partner of Alexander Hesler.1880 - Married Dora C. Phelps of Evanston, Illinois. 1880-85 - In charge of the insulating department of the Western Electric Co. in New York City. 1885 - Spent three months in charge of the insulating department of Ansonia Brass and Copper Co., Ansonia, Connecticut. 1885-86 - In charge of the electric light plant of Boston Rubber Shoe Co., Malden, Massachusetts.1886-93 - A professional photographer in Boston, employed by the Boston and Maine Railroad and doing landscape and architectural work as well as marine photography. 1887 - Birth of daughter, Mildred Dora Peabody.1889 - Takes first prize in a marine photography exposition in Boston.1891-93 - Published several editions of Representative American Yachts. Also published Coast of Maine.1893-99 - Mostly official photographer for various eastern and western railroads during the summer and a lecturer in winter. January 9, 1898 - Wife died. 1899 - Photographer to American Architectural Expedition to Mexico. 1900-1908 - Field photographer for the Detroit Publishing Company on both Atlantic and Pacific coasts. 1901 - Publication of Peabody's photographs in "Spanish-Colonial Architecture in Mexico", by Sylvester Baxter. 1902 - Became permanent resident of Pasadena, California. 1908 - Began to specialize in the publication of educational lantern slides, particularly scenes and descriptions of national parks. --Also traveled to England and France to photograph cathedrals and other architectural subjects for the Horace K. Turner Co., Boston.1923 - Continued to publish lantern slides and was also an agent for projection apparatus. 1931 - Made disc recordings of travelogues, synchronized with the showing of his pictures. Published numerous lectures written to accompany slides and films of scenes in the United States, Canada, Mexico, and Europe. 1941-47 - Purchase by Historic New England of albums of photography from Peabody. See correspondence on microfiche under "P."March 25, 1951 - Died at home in Glendora, California. Memberships-Psi Upsilon Fraternity-Charter Member of Photographers Association of America-Charter Member Boston Camera Club-Member of Atlantic Yacht Club of New York-Member of Corinthian Yacht Club of Marblehead, Massachusetts-Member of Appalachian Mountain Club of Boston-Member of society, "Sons of the Revolution"-Member of Technology Society of ArchitectsAwarded six first prize silver medals for photographic work at different conventions of the Photographers Association of America. Sources: Huntington Library finding aid, http://www.oac.cdlib.org/data/13030/q0/kt8b69r2q0/files/kt8b69r2q0.pdf, 2010-01-06; Getty Union List of Artist Names, record ID 500036822; Campbell, Joan. Finding Aid to the Henry G. Peabody Collection, 1982.

The collection is arranged by vessel name and is accessible by means of an index.