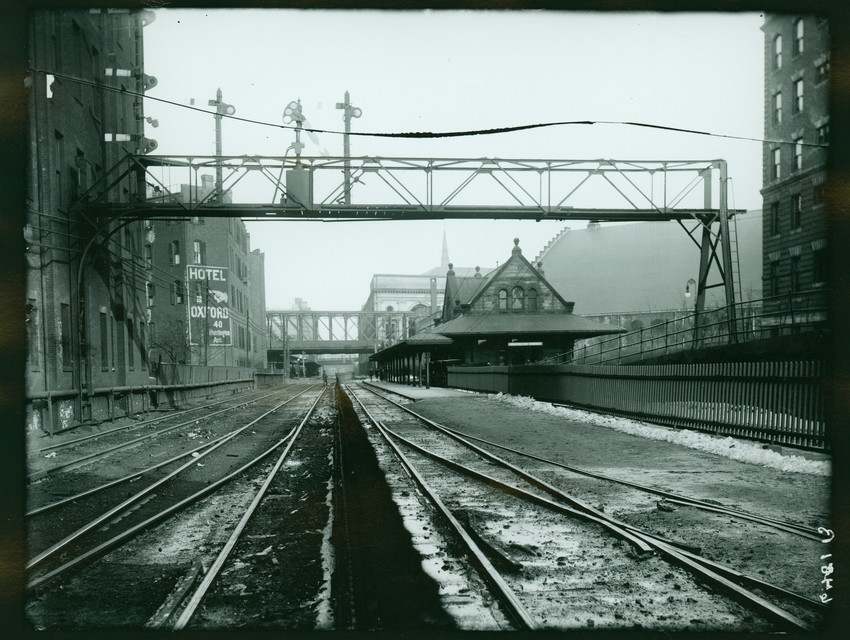 The Boston & Albany Railroad Photographic Collection consists of more than 2,500 original negatives and study prints. These images constitute a record of the company's construction activities, rolling stock, stations, and specialized equipment from the late 1890s until approximately 1920.

While the collection is of great interest in regard to railroad history, it also holds value as a resource for architectural history. Many towns throughout Massachusetts are revealed as they were seen along the tracks. There is also extensive coverage of the rail facilities attached to the piers of the Cunard Lines in East Boston and of the building of stations in Framingham, Worcester, and Pittsfield. Other locations are also well-represented, such as Boston, Allston, and Newton.

Source: Guide to the Library and Archives, 13.

In 1883, the Boston & Albany acquired track then owned by the New York and New England Railroad as far as Newton Highlands, and in 1884, began the construction of a line northwest to its mainline creating a commuter loop. "The Circuit," as this route was called, officially opened in May 1886 providing double-track operation from downtown Boston through Brookline to Newton Highlands, then north into Riverside and four tracks on the mainline from Riverside back to downtown so that commuter and mainline operations did not conflict. By 1889 as many as 35 trains traveled the Circuit daily, providing superior commuter service.

In 1899, the new South Station union station opened in Boston, a few blocks northeast of the old terminal. That terminal had been located on the west side of Utica Street, from Kneeland Street south to a bit past Harvard Street, now part of the South Bay Interchange. Even earlier, the terminal was in the block bounded by Kneeland Street, Beach Street, Albany Street (now Surface Artery) and Lincoln Street (which later became a freight house).

By the early part of the twentieth century, commuter rail service was provided east of Worcester, with intercity rail continuing on west. The intercity trips were taken over by Amtrak on May 1, 1971, and on January 27, 1973 the Massachusetts Bay Transit Authority acquired the line east of Framingham. Service beyond Framingham was discontinued October 27, 1975, as the state did not subsidize it. Conrail took over the Pennsylvania Central on April 1, 1976. On September 26, 1994, some rush hour trains started to serve Worcester on Conrail trackage (which became CSX trackage on June 1, 1999), extending to other times beginning on December 14, 1996.

The prints are arranged by localities, with a number of subdivisions by subject.