Obscure stories of the past are often found between the lines of historical records. The piece of ephemera shown here came to light during research for Rooted: Cultivating Community in the Vermont Grange, the sixth film in Historic New England’s Everyone’s History documentary series. The document is the bimonthly Friday program agenda of the Grand View Grange in Addison, Vermont. It appears to be a simple listing of events, but between the lines it conveys much more information—evidence of the Grange’s recognition of black history in America. 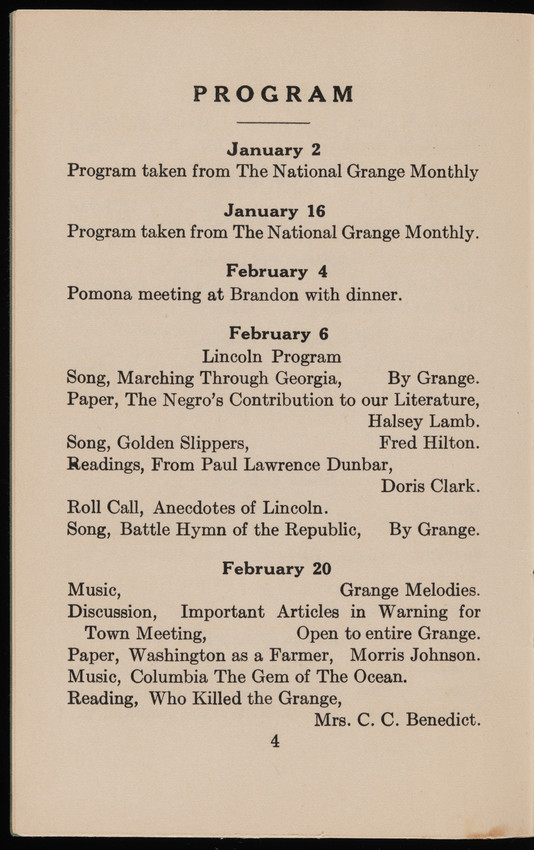 The February 6 event contains the clues

Although titled “Lincoln Program,” the agenda activities honor not only the nation’s sixteenth president, who was in office during the Civil War, but also laud some African American cultural contributions. It’s apparent from the date of the program that it was scheduled to coincide with Abraham Lincoln’s February 12 birthday. It isn’t obvious that the program led into Negro History Week.

Carter G. Woodson, a historian and one of the founders of the Association for the Study of African American Life and History, launched Negro History Week in 1926, designating that it be observed during the second week of February. Woodson selected this period because it contained Lincoln’s birthday as well as that of the formerly enslaved world-renowned abolitionist, author, and equal rights activist Frederick Douglass, February 14. Because blacks across the United States had traditionally celebrated the birth dates of both men, Woodson and some of his colleagues designed a weeklong program to promote black achievement and publicize black history. 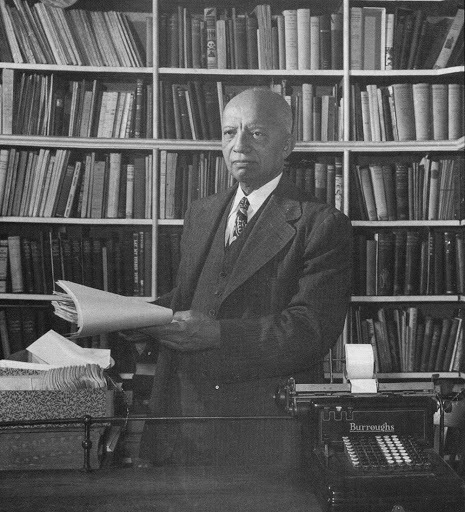 The Grange opened its program with a rendition of “Marching Through Georgia.” Written by Henry Clay Work at the end of the Civil War, the march recounts the Union Army’s capture of Savannah, Georgia, in late 1864 by forces under the command of Major General William T. Sherman.

The session continued with a Grange member delivering a paper titled The Negro’s Contribution to our Literature and then the assembly sang “Golden Slippers.” The group most likely sang the original version, a Negro spiritual made famous in the post-Civil War era by the Fisk Jubilee Singers, the choral group of historically black Fisk University, and not the slightly retitled parody “Oh, Dem Golden Slippers.” The latter was written in 1879 by African American musician/songwriter James A. Bland and became a minstrel show staple. Next, a Grange member read from the works of Paul Laurence Dunbar (1872-1906), one of the first influential black poets in American literature. Dunbar also wrote novels and plays.

Roll call featured Grange members reciting anecdotes ascribed to Lincoln. The program ended with a rendition of “Battle Hymn of the Republic,” the patriotic anthem by Julia Ward Howe that speaks truth to power against slavery, the cause of the Civil War.

It probably would have been impolitic for the Grange to call this event its Negro History Week Program, given the tenor of the times. Nevertheless, this populist national organization, founded in 1867 and officially known as the National Grange of the Order of Patrons of Husbandry—that united farmers and supported them politically, economically, and socially—recognized the struggle to ensure that America’s founding ideals extended to all citizens.

We don’t know how typical or long-lived this observance was among granges. In 1970, black educators and activist students at Kent State University in Ohio began observing Black History Month. In 1976, the year of the nation’s bicentennial and the fiftieth anniversary of the celebration of black history in America, President Gerald Ford formally urged the nation in a speech to join him in paying tribute to Black History Month “and the message of courage and perseverance it brings to all of us.”

Reading between the lines, we can look back and see in the the Grand View Grange’s 1931 program not only a reflection of Woodson’s achievement but an affirmation of the contributions of African Americans to our shared history and culture.