Historic paint colors, inside and out

Because we are a professional painting company, our customers assume we are familiar with, or expert in, color (color theory, color selection). This is far from true, but given our daily application of color to homes, inside and out, we do acquire a reasonable comfort with conversations about color.

That being said, it is far easier to critique than it is to create. Ask me my opinion about a color and I’m happy to share my thoughts, but give me a blank canvas and the challenge is far greater. There are, however, cues we reference when the question of color is raised. These are not educated or expert cues; they are merely pragmatic. For example, here in New England, the landscape plays a significant role in color determination. Southwest pastels look great in New Mexico, but they look schizophrenic on a historic home nestled among the woods and orchards of Massachusetts.

The image below is the Osborne farmhouse in Stow, Massachusetts, circa 1820. We applied approximately twenty-four sample colors to satisfy the owner’s interest in a color change. Ultimately, we repainted the house the same color it was! And rightly so. Stow is famous for its orchards, and this farmhouse and its barn almost glow despite the weak autumn light. We could call the color Red Delicious but since it was a custom color match, it is forever recorded as Jones’ Original Red. 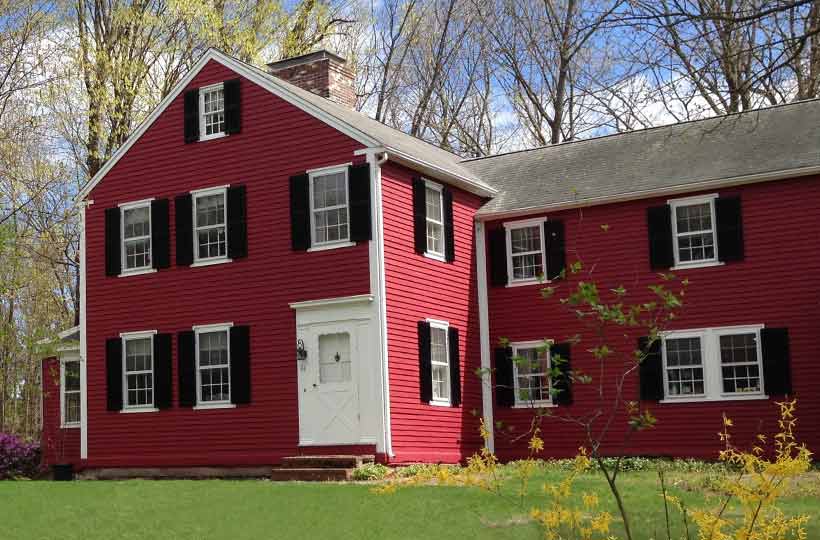 Closer to our office in Newton, and a more urban environment, this Brookline home became the canvas for the owner’s love of color and architectural detail. The before photo shows a subdued color scheme. Grays, beiges, and blue grays predominate. 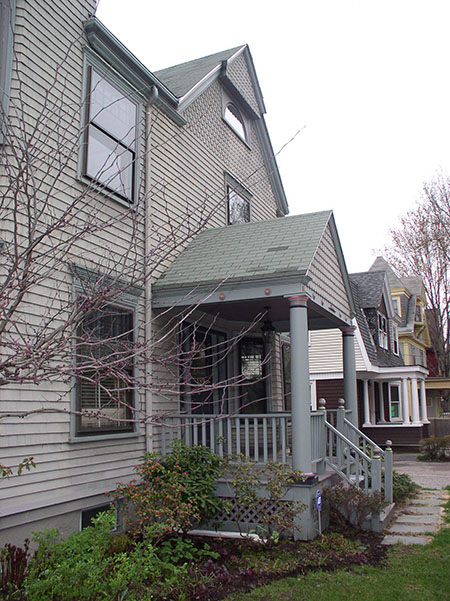 A full-scale painting renovation plus a new roof allowed more experimentation and final selection of a more sophisticated palette, while avoiding any sense of gingerbread excess. 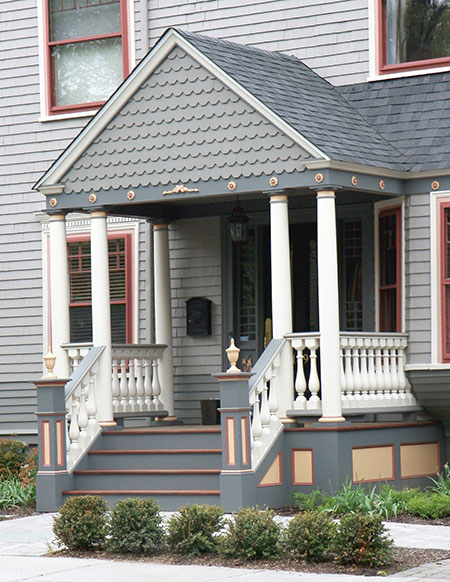 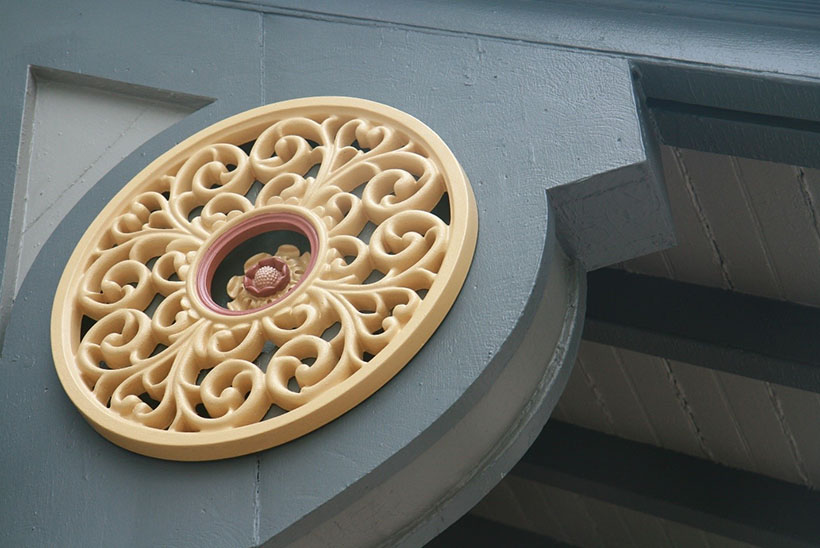 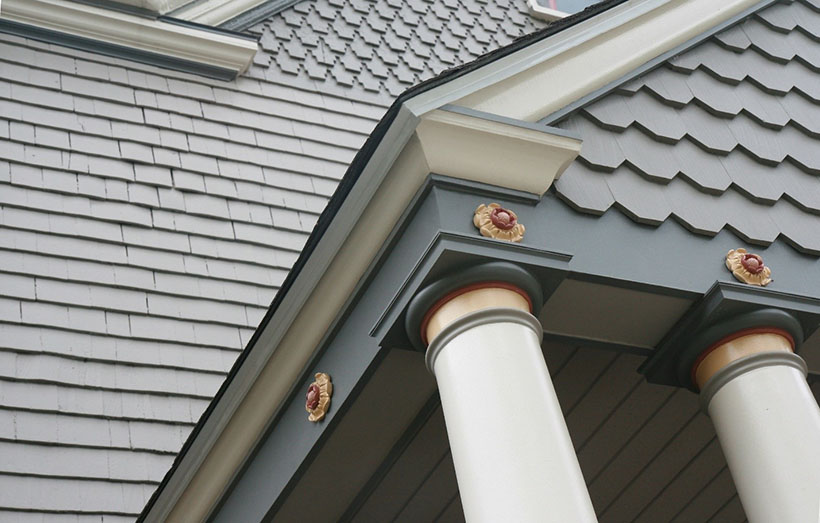 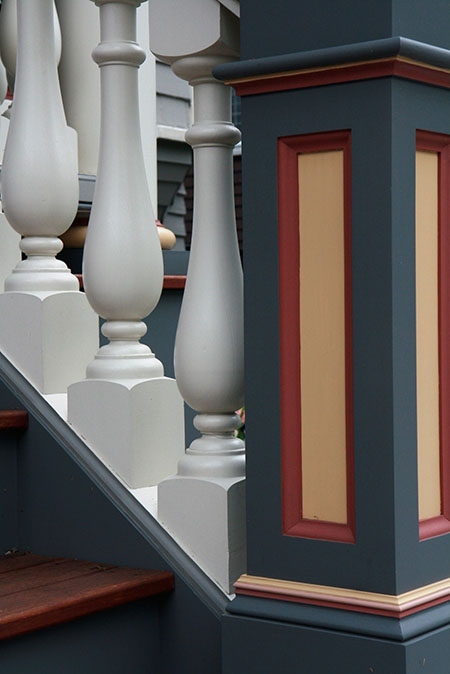 Similarly, and just around the corner, this Brookline home needed significant restoration before its new colors could pop. Once again, roof color has bearing on the palette. Century-old slate provides this house with a formality and grace that deserved a traditional, earthen color scheme. 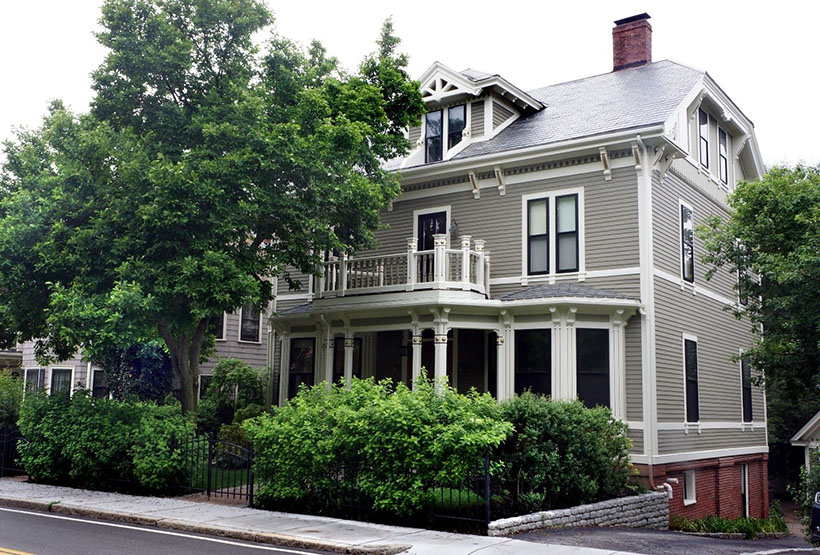 Fortunately, the owner also saw the potential to uncover the previously painted brick, which suffered from efflorescence (masonry salt migration to the surface due to water intrusion) and general ugliness. 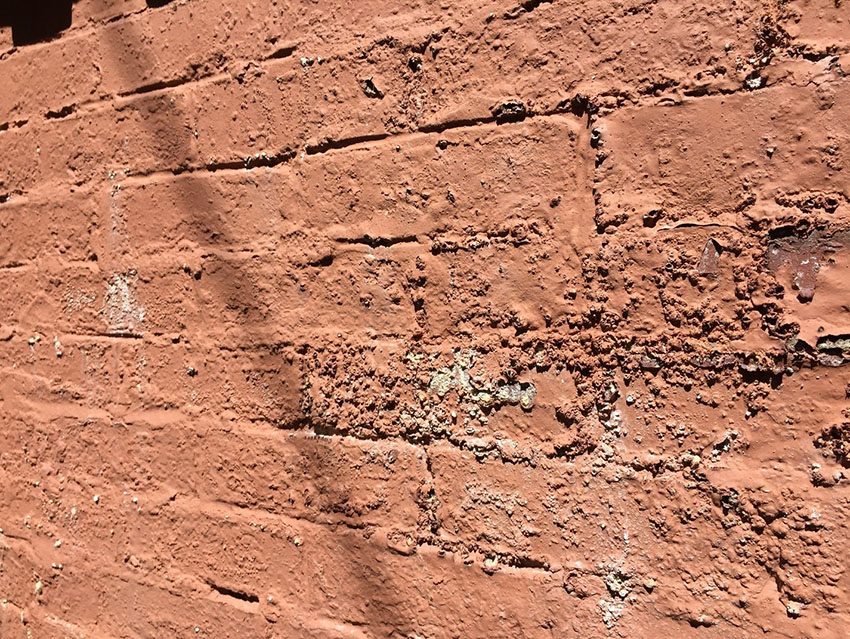 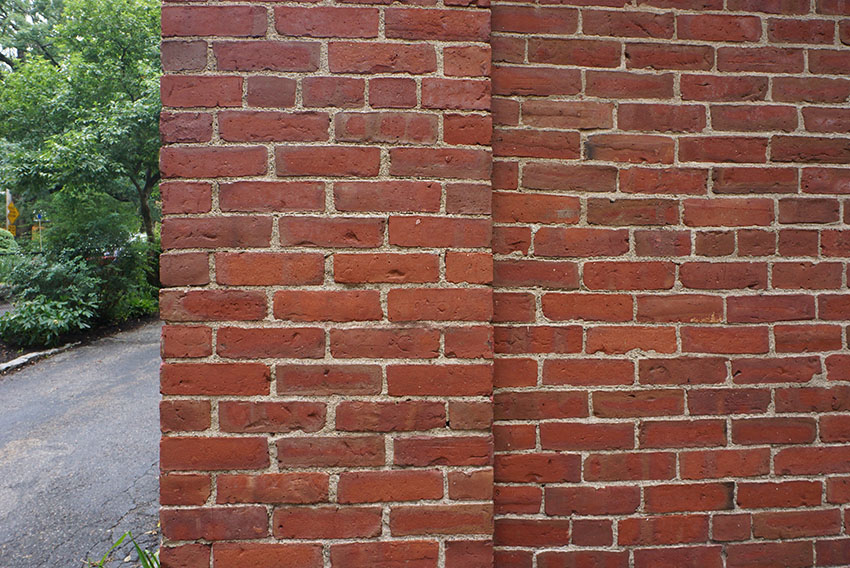 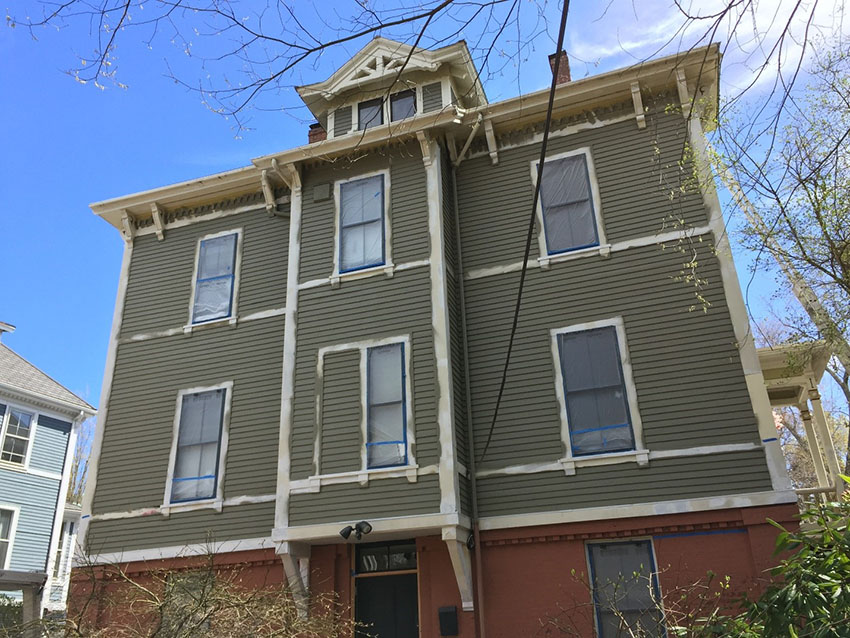 The benefits of exposing the brick are many: introduction of a variegated foundation that better served to root the building in the landscape, while serving to add suitable mass to the ground floor. The house no longer floats above the earth, but rather is rooted in it. Once the organic hues of the brick were recovered, this influenced the color selection for the trim and siding and also served to connect the foundation to the roof slate.

The use of color and its effect on psychology tend to fulfill a different need inside a historic home. Rather than confronting the mass of a large and elaborately detailed exterior structure, interior use of color is finer, more nuanced, and subtle. The photos below of a formal dining room use color to great effect, highlighting a focal point and drawing the eye up to a lovingly trimmed ceiling. 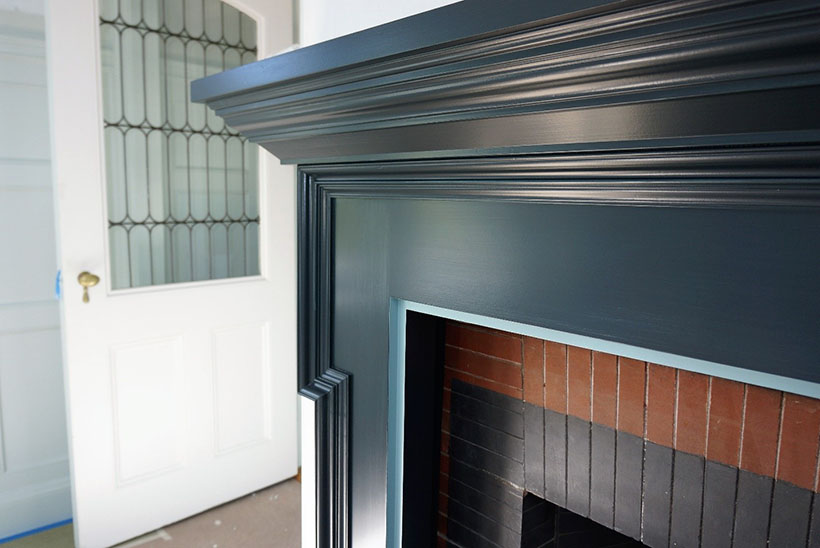 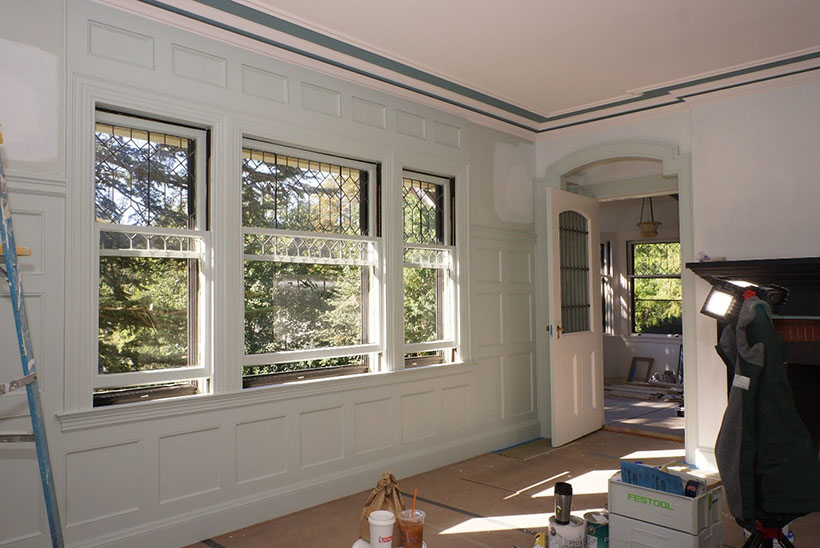 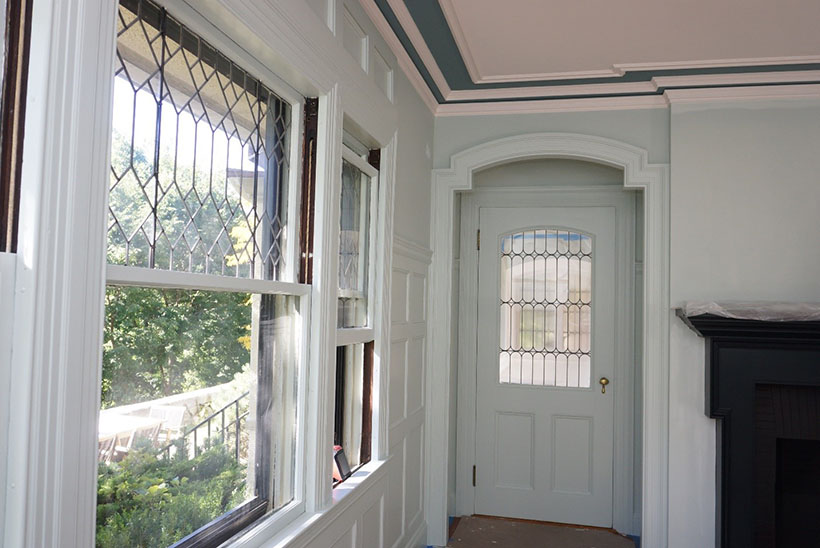 In the Newton kitchen below, we worked alongside the owner, architect, and Farrow and Ball design staff to choose the right combination of whites to complement the striking blue island. I write whites and mean whites – there are three different whites in use in the kitchen! Notice the gray veining in the island countertop, and its resonance in the white gray of the painted trim. This attention to detail makes all the difference. In the words of the owner, her kitchen has become the focal point of her entire house. 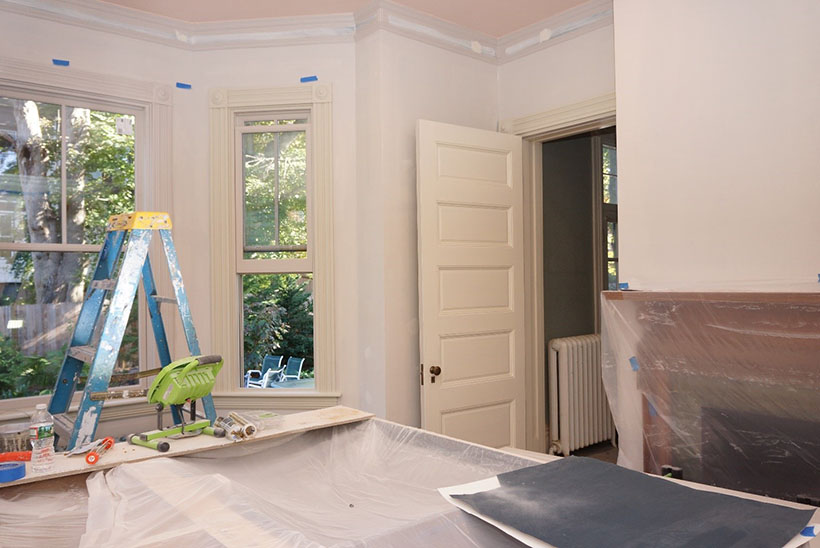 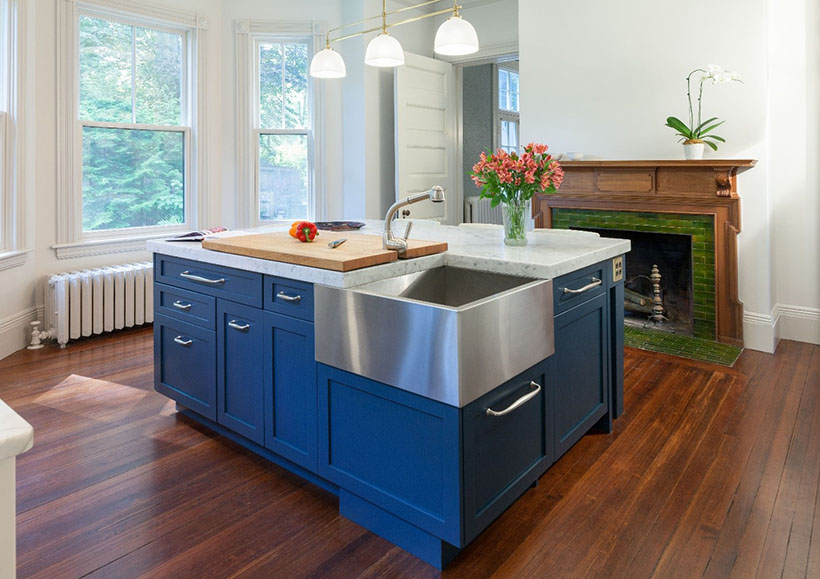 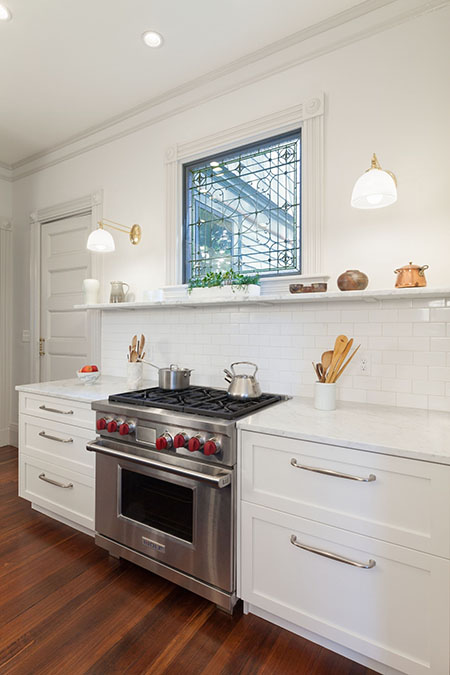 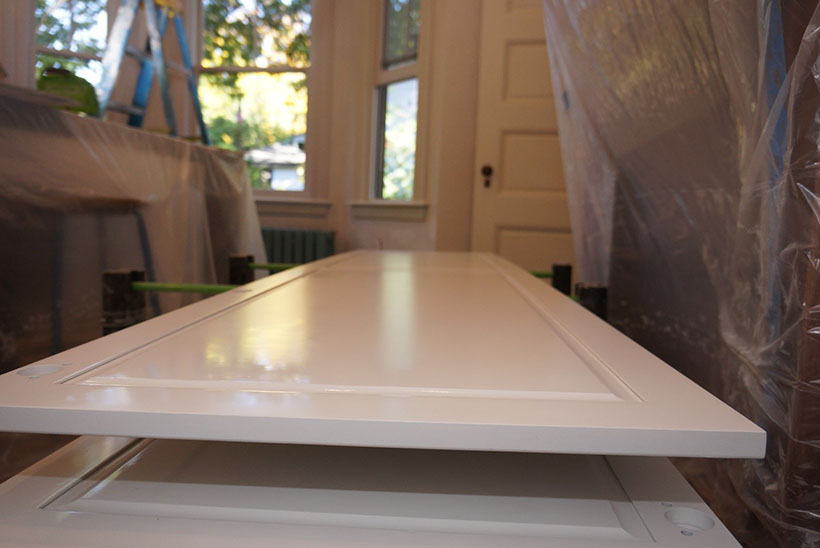 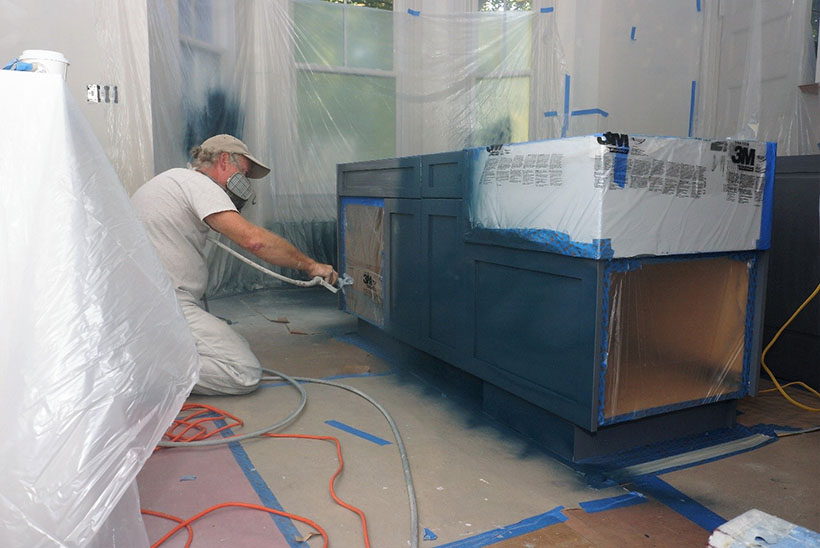 No conversation about color and its drama could be complete without reference to one of our more stunning projects, in Boston’s historic Back Bay. This stately brownstone was built by a successful merchant sea captain. The dining room and kitchen below reveal extensive homage to a Chinese aesthetic the captain brought back from his travels: ivory tusks for lighting sconces over the fireplace, extensive use of mahogany trim finished in a black lacquer, and finally, the glory of lacquered red walls. 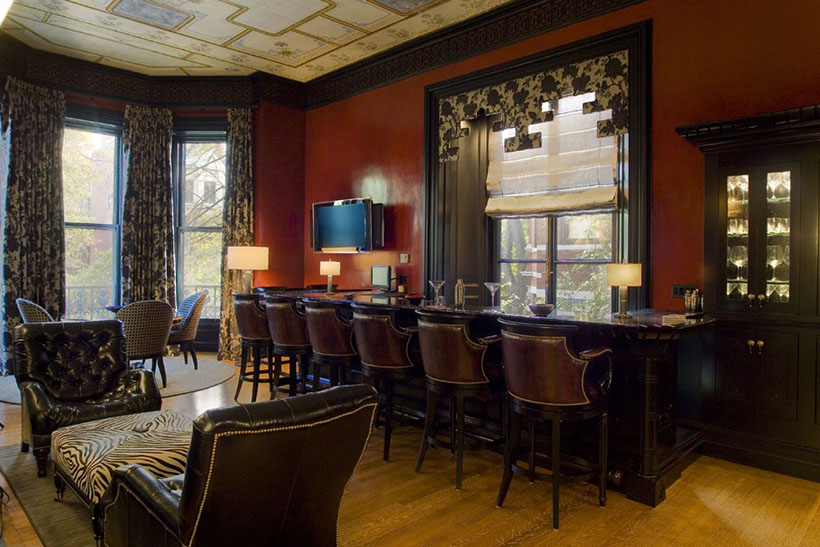 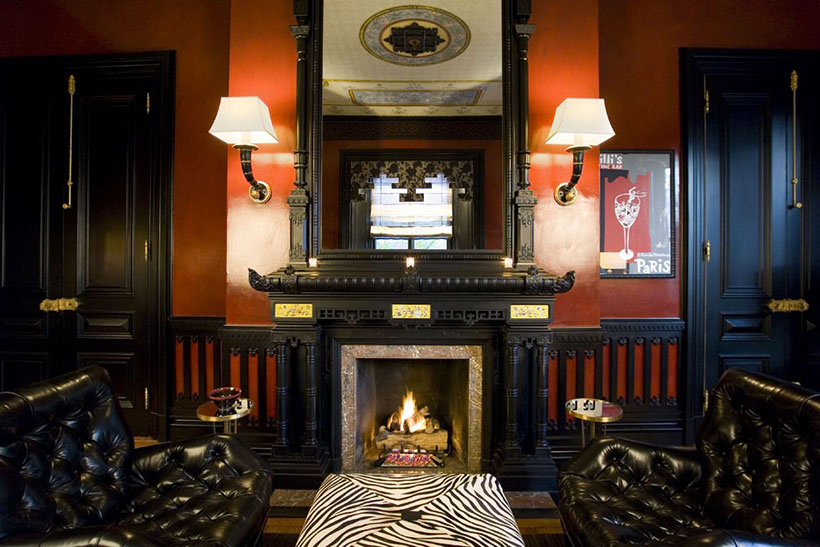 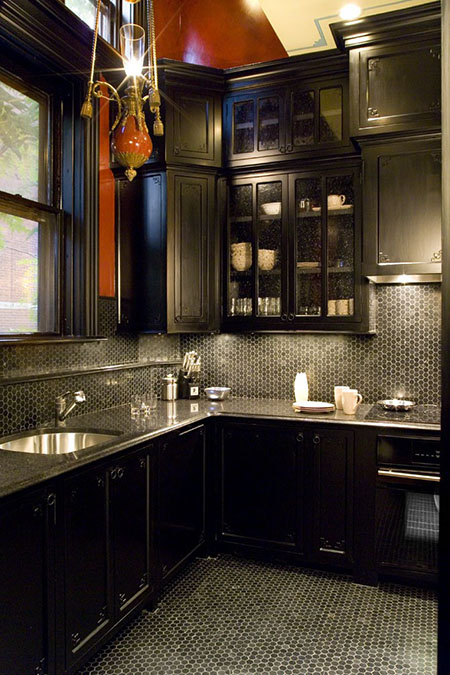 Nigel Costolloe is the president of Catchlight Painting, a full-service residential painting company serving the Greater Boston Metropolitan Area. He is active regionally and nationally in the Painting and Decorating Contractors of America (PDCA) as a leader, speaker, and mentor.