This summer, Helina Dawit Yohannes, an incoming senior at Suffolk University, is working with Urban Edge and Historic New England to compile an archive of the personal stories of residents of Boston’s Roxbury neighborhood. As part of Historic New England’s goal of preserving and sharing stories of life in the region, this project reveals what it was like to live in this community during the many changes of the twentieth century. Through these interviews, you’re invited to learn about the relationships that were fostered in the community, and how Roxbury shaped the lives of its residents (and vice versa). Below, Helina recounts her interview with lifelong Roxbury resident Wallace Tilford, who describes how Urban Renewal and other factors changed his neighborhood. 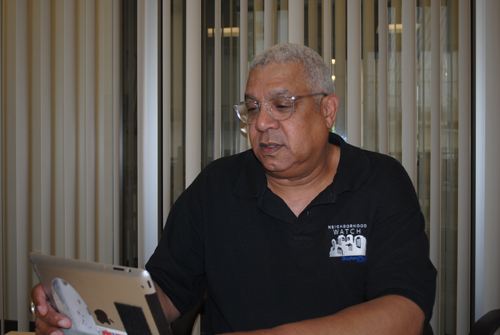 “We’re coming out at the bottom because we are the bottom. Not because of what we did, but because of the economic things that were done to us. To them, it’s like… ‘I got here ’cause I did so-and-so.’ No, you didn’t. You got here because your parents were able to, because of the restrictions applied to other people, get stuff that my parents weren’t able to get.”

Wallace Tilford was born in 1954 and lived on the corner of Westminster Avenue, across the street from where Westminster Court, a seventy-unit development co-owned by Urban Edge, stands today. His parents, originally from Missouri, gave birth to him in Boston in the 1950s. His father settled in Roxbury after returning home from World War II. The Tilfords moved into the first floor of a two-family home owned by Wallace’s godmother in 1963. Westminster Court was not yet built, and in its place was the Howard-Hershey estate, a mansion concealed by trees.

Wallace remembers playing in those woods. He proudly declares that his street was very diverse, and that “everybody knew everybody. We knew whose mother and father lived there. ‘Don’ t go to that house ‘ cause Ms. so-and-so will tell on you.’” He explains, “Boston at that time was very communal.” Aside from the family of a local judge, the families on Westminster Ave. were generally lower-middle class. “Most of the people that were in my neighborhood were recent immigrants,” he says. “When I say recent I mean they came [to Boston] in the ’40s and ’50s.”

He remembers playing in the neighborhood and says that he had much more freedom than kids in Roxbury do today. He believes parents and their children today worry about gang activity and limit their access to some places. He remembers being free to play in the woods by his house, on the street with his neighbors and friends, and at a playground by the school.

Wallace attended David A. Ellis Elementary until 1966, when he began attending school in Lexington, Massachusetts, through the METCO (Metropolitan Council for Educational Opportunity) program. He speaks highly of his experience in Lexington, and tells me about assimilating in a predominately white school and neighborhood. METCO afforded opportunities such as afterschool programs, and the chance to be taught by Ivy League-educated teachers.

I ask him how he feels Roxbury has changed through the years. “That area,” he says, pointing out the window to Columbus Avenue, “didn’ t change for a long time. It was the same type of neighborhood until recently.” He describes how Columbus Ave. was once filled with factories and wooden bridges.

He traces the first wave of change in his community to the elevated MBTA line that ran through Roxbury. “When they tore that train down, the neighborhood changed.” He explains how what he calls “the Crack Era” (the ’80s and ‘ 90s) adversely affected his community. This period saw a surge in violence and drugs in Roxbury and all over America. Wallace served as a Community Service Officer for the Boston Police Department, which allowed him to see the community through the eyes of law enforcement.

He adds that during the last fifteen years, the most distinct change has been gentrification. “We lost a lot. People [in Roxbury] lost a lot of opportunities because we lost a lot of jobs.” He explains how redlining (the denial of services to certain areas based on their racial or ethnic composition) created anger and frustration within the community. This boiled over into rioting in the 1960s, and the “white flight” of white Bostonians to the suburbs.

“A lot of parts of Mattapan, Dorchester, and Roxbury were Jewish neighborhoods, and had been since the early 1900s,” Wallace explains. “After the riots and stuff they sold their properties and left. They were starting to rebuild all these towns around Boston, and they went to Concord, Lexington, Newton, wherever! They got out of the city.” As a result, a lot of inner-city areas were depressed because “they took their businesses [which were along Blue Hill Avenue at the time] with them.”

I ask him what he remembers about the time when the Washington Park Renewal Area was proposed. “Those were turbulent times,” he says, “and it affected the city completely. [The Boston Redevelopment Authority] just took property. They told us what they were gonna do. The community didn’ t have any–if not at all then very little–input because we didn’ t have a lot of community cohesion at that point. You have to understand, this was the ’60s and everybody was scared of black people because we were rioting. So if they tell you they’ re going to do something for the better, it just happened.”

He says African Americans in Roxbury had little input in neighborhood development at the time. Reflecting on the plans the BRA presented, he says with frustration, “everybody hated it because the city was coming in and doing whatever they wanted to do. They tore down the whole West End…a neighborhood of immigrants.” He adds that the West End was torn down to build infrastructure to which the community’s original inhabitants lacked financial access. This began a trend that continues to make affordable housing scarce. He says gentrification is the result of a growing, but predominantly white, middle class. He laments that blacks were not given the foundational opportunities in the 1960s to put their children and grandchildren on the path to joining this group today.

“We didn’t have access to a lot of that [in the ’60s and ’70s],” he says. “That is why, today, there are so many racial income divisions, because they were offered opportunities like the GI Bill [which offered a range of benefits to veterans]. We weren’t given access to that. They bought houses with no money down! They got a college education for free! That started the great divide in income distribution, right there. And when people tell me ‘if you work hard and do something’…no, no, no. We’re coming out at the bottom because we are the bottom. Not because of what we did, but because of the economic things that were done to us. To them, it’s like ‘no that’s not it. That can’t be it’ and ‘I got here cause I did so-and-so.’ No, you didn’t. You got here because your parents were able to, because of the restrictions applied to other people, get stuff that my parents weren’t able to get. But they don’t see it like that.”