This summer, Helina Dawit Yohannes, an incoming senior at Suffolk University, is working with Urban Edge and Historic New England to compile an archive of the personal stories of residents of Boston’s Roxbury neighborhood. As part of Historic New England’s goal of preserving and sharing stories of life in the region, this project reveals what it was like to live in this community during the many changes of the twentieth century. Through these interviews, you’re invited to learn about the relationships that were fostered in the community, and how Roxbury shaped the lives of its residents (and vice versa). Below, Helina recounts her interview with Frances Sims, who moved to Boston from Alabama as a young adult and eventually settled at the Academy Homes housing development co-owned by Urban Edge. 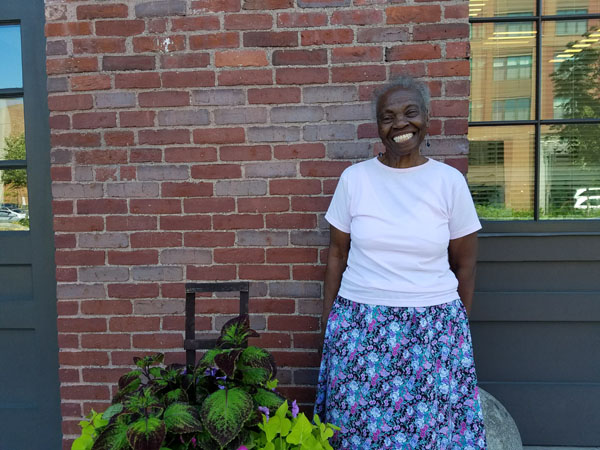 Frances Sims was born December 3, 1936, in Birmingham, Alabama. After graduating from high school, she moved to Roxbury and worked as live-in help for a family in one of the surrounding suburbs. Although moving North was a significant change, she attributes her easy assimilation to Boston to the people she met, who “showed me where to go, what to do, what not to do.”

When Frances first settled in Roxbury, she lived in the commercial district of Dudley Square. She recalls that this bustling area had “everything you would need. …You wouldn’t need to go into town for anything,” she said, explaining that Dudley Square even had quality clothing and shoe stores. When asked how she got around the city, Frances says, “At that particular time there were no buses. There was a rail up above,” she said, referring to the elevated rapid transit train. “Of course, I didn’t have a reason to get up there. … It was just a little high for me. And it wasn’t necessary because they had nice stores down in [this] area.”

“I was very fortunate because my apartment was right across the street from the Woolworth’s.” The F.W. Woolworth Company was a retail chain started in 1878 and is credited as being a leading pioneer of the five-and-dime-store business model. Woolworth’s was globally successful, but the chain went out of business in 1997.

Frances doesn’t remember exactly when she moved into Academy Homes. “We’re going back some. … I’ll put it like this: When I moved into my apartment, they were still working on parts of Academy.” That means she moved there in 1963 or 1964, when Academy was still under construction. It was also the same time that she was courting the man who would become her husband.

Initially, Frances moved into a three-bedroom apartment. Then, when a family living downstairs in a two-bedroom apartment relocated, “I decided I didn’t need the three bedrooms. So, I took it.”  Although she didn’t know anyone when she moved in, she says “quite a few people were moving in from other places [so,] we got to know people. The good and the ones that weren’t so good—and it all worked out real good.”

Frances notes how Roxbury has changed since her arrival in Boston. “The Walgreens wasn’t there. The Stop and Shop—it was there but it was not in the condition it is now.” In terms of the people, “everybody was nice and friendly,” she says. When I ask how Roxbury has changed over the years, Frances says, “Well for one, I don’t think we had, at that particular time, as many ethnic people as we have now.” She is impressed with the structural change of the neighborhood. “From where we live now,” she says, “you can walk up the street to the supermarket. You can also get the train, going either way. And you go down the other way and the Walgreens is right there. Everything you need is within walking distance. If you don’t feel like cooking, you just go another block and you get the subways and all those different eating places.”

If she needed to go someplace she couldn’t walk to—which she says happened rarely—she used public transportation, often the bus. “It didn’t bother me because where I come from we used the bus.” She said “coming from different places in the South—it was much different than here. You didn’t have to sit in the back of the bus here.”

When I ask what she thought about the Washington Park Renewal Project, Frances said, “They just made it a whole different place. I thought it was a good thing. Considering what it looks like now, it’s definitely a good thing” because the renewal project “made the neighborhood accessible and convenient for a lot of people.” She believes the changes were for the better and proudly adds, “They’ve come a long way—and I’ve seen them do it.”

One thing that makes that apparent is the way in which residents look out for the youngsters who live in Academy Homes, Frances says. “If you see a child doing something wrong, or doing something where they may get hurt, you can speak to the child.”