This summer, Helina Dawit Yohannes, an incoming senior at Suffolk University, is working with Urban Edge and Historic New England to compile an archive of the personal stories of residents of Boston’s Roxbury neighborhood. As part of Historic New England’s goal of preserving and sharing stories of life in the region, this project reveals what it was like to live in this community during the many changes of the twentieth century. Through these interviews, you’re invited to learn about the relationships that were fostered in the community, and how Roxbury shaped the lives of its residents (and vice versa). Below, Helina recounts her interview with lifelong Boston resident Beryl Harris, who describes her experience at the Academy Homes housing development co-owned by Urban Edge. 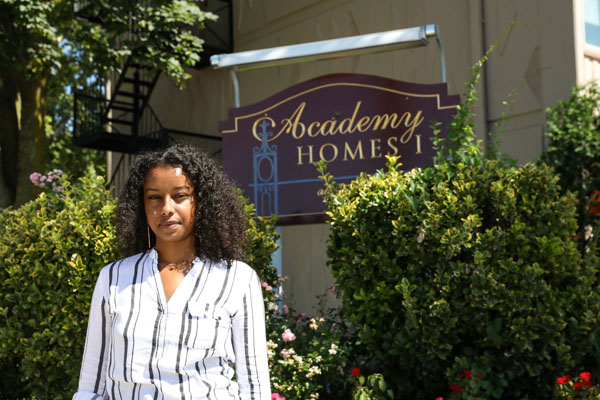 While Beryl Harris declined to have her photo taken for this project, Helina Dawit Yohannes is shown here outside Urban Edge’s Academy Homes in Roxbury,

Born in Boston in 1931, Beryl Harris attended Everett Grammar School, Louis Junior High School, and Roxbury Memorial High School, using the bus to get to school from junior high on. As an adult, she made her living working in a factory (“that was mainly where black people could work,” she recalls); making and tailoring costumes for an opera company, at the Harvard drama center, and at her sister’ s bridal shop; and as a bus monitor and tutor at Hingham Public Schools. She left her school job in search of a workplace that offered pensions. This led her to the welfare office where, she says, “I was there just long enough to get on the pension list, so that worked out well.”

Throughout, Beryl maintained a tailoring business on the side. She built a reputation for being able to alter high-end pieces such as Vera Wang dresses until, she says, “I guess about four years ago, my hand started to go and I thought I needed to go along with it. I’m not one to botch people’s stuff. When you’re done, you’re done.”

Beryl moved from Dorchester into the Academy Homes in Roxbury in January 1969 because of a fire. She moved in with her family, and half of her eleven children were raised in Academy Homes. She resolved to get to know her neighbors, and greeted anyone who passed by her door. “I would say, ‘good morning!’ and after three times they get the message and think, ‘might as well just say hi.'”

I ask her what it’s like living in a Modern building. She chuckles and replies, “This is modern?” I reply that the building’s architectural style is mid-century Modern. She says the Academy Homes layout isn’t significantly different from the brownstone where she grew up. She adamantly believes in her individual ability to make a home anywhere. What she liked most was that it was hers.

She recalls a social worker who brought her to the nearby Bromley-Heath housing development, which had a reputation for crime. She replied, “If I lived here you would take my kids. So why would you bring me here to look at this place?” Academy Homes, by contrast, was a nice, safe place, and she was happy to raise her kids there. Living there in the 1960s and ’70s was “fabulous.”

The neighborhood was relatively quiet and lacked “too much commotion.” Beryl’s main priority was raising her kids and making sure they stayed on the right path. She says that a lot of things were going on in the neighborhood and “a lot of people were affected by it, but it doesn’t bother me. I don’t let nothing bother me. I don’t have to live with them. I live in here.”

When asked about the Washington Park Renewal Area built between 1963 and 1975, Beryl paints a grim picture of demolition, destruction, and displacement. I ask her if she believes the ends justified the means. “Not really… no,” she replies. “They didn’t make it any better that’ s for sure.” She wasn’t involved in any organized community activism group. “The closest I got to that was Urban Edge, much later…I was very busy trying to raise my kids.” She recalls various movements that made small wins in the community. She made personal connections to local politics, and felt that she had their ear. “I didn’t have to go to meetings. I could go talk with them, get my point across, and they would go fight for whatever it was that I wanted.”