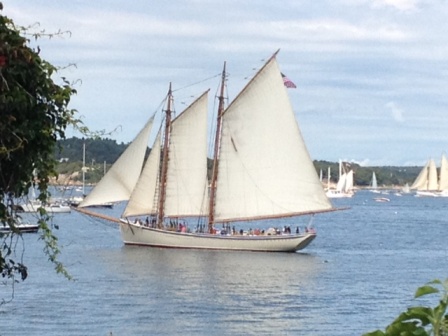 On Sunday, September 2, eighty people visited Beauport, Sleeper-McCann House, in Gloucester, Massachusetts, for some of the best harbor views of the Parade of Sail, part of the Gloucester Schooner Festival held annually over Labor Day weekend. Sixteen schooners participated in the parade to begin the Mayor’s Race for the Esperanto Cup. Leading the parade was the Adventure, a 122-foot historic wooden dory fishing schooner built in 1926 in Essex, Massachusetts.

The Adventure is one of two National Historic Landmarks in Gloucester, the second being Beauport. Over the past four years, the Parade of Sail viewing at Beauport has become a special and popular event, selling out two weeks in advance.